Rice Pudding on the hob or stove top is super easy and lovely and creamy. Enjoy it hot or cold, as a snack or as a warm pudding on cold days. A homemade rice pudding is also very cheap when compared to ready made shop varieties. It also means less packaging. And if you need another reason, it contains a lot less sugar. I often make up a batch of this as it keeps well in the fridge for 4 - 5 days.

The basic recipe for stove top rice pudding is straightforward. All you need is pudding rice, milk, and a little butter and sugar. After that, you can add lots of different toppings or flavours, or just enjoy it plain.

What Rice is used in Rice Pudding?

The best rice to use is called Pudding Rice. It's a short grain rice. In supermarkets, you'll probably find it near the tinned or canned rice pudding rather than the rice section. If you can't get hold of pudding rice, you can use arborio rice or calrose rice. These are also short grain and will give your pudding that nice creamy texture.

How to make a Vegan Rice Pudding

It's quite simple to make a vegan or dairy free rice pudding. Leave out the butter and replace the milk with almond or soya milk. For a sweeter version, you can replace half the milk quantity with coconut milk.

Can you Freeze Rice Pudding?

How to make it

Gather your ingredients (see recipe card below). This is a useful recipe for making a batch, just double or triple the quantities in the recipe card. Remember, it will store well in the fridge for 4 - 5 days.

Rice pudding is delicious on its own, but there are many different flavours you can add

Cooking Rice Pudding in the Oven

Making Rice Pudding on the hob is much quicker than in the oven and uses less energy, but for a hands off approach, you can also make it in the oven. Heat the oven to 150°C/300°F/gas mark 2. Grease an ovenproof dish and stir in all the ingredients. Sprinkle nutmeg over the top and place on the middle shelf for 2 hours. After 45 minutes, stir everything to prevent it sticking.

Making your own Rice Pudding saves lots of money but also lots of packaging. A 500g bag of pudding rice will make around 30 x 125g portions. Many of the ingredients can also be bought Fairtrade such as pudding rice, sugar, cinnamon, nutmeg, coconut milk as well as bananas, pineapples and mango. 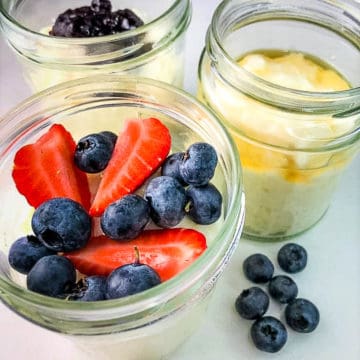 Easy Rice Pudding on the Hob

The nutritional information is for the basic recipe and doesn't include any toppings.

Use a pudding rice or a short grain rice such as arborio or calrose. Add the ingredients to a cold pan and bring to a boil. Don't let the milk boil over. To make a Vegan or Dairy Free rice pudding, leave out the butter and replace the milk with almond milk or coconut milk or half and half. Coconut milk with make it much sweeter so you might not need to add the sugar.