Easy Roast Honey and Mustard Glazed Gammon with vegetables is a popular roast dinner and here I'll walk you through the entire meal with all the timings so everything is ready on time.

Be sure to weigh your gammon joint before starting so you can calculate the cooking time (see below). People often ask what's the difference between a gammon and a ham joint? The answer is none. The uncooked joint is often called gammon and once it is roasted or boiled, it becomes a ham.

How to Cook a Gammon Joint

You can cook a gammon joint by boiling it or by a combination of boiling and roasting it in the oven. If you're roasting it, then you can glaze it with for example a honey and mustard glaze. Glazing your gammon joint not only adds lovely extra flavour, it also stops it drying out. Scoring the skin and adding cloves as in the picture below, adds a sweet spicy flavour and also looks impressive

Roasting and boiling times for Gammon

To calculate the cooking time for your gammon joint, weigh it then place it in a large pan. Cover with cold water, bring to the boil and cook for the following time. You can add some extra flavour to the water if you like such as cloves, cinnamon or bay leaves.

If you are going to also roast your gammon joint, then boil it for just half the cooking time. Remove it from the oven. Place it in a foil-lined roasting tin and cover it with foil. Bake for the remaining cooking time at 180C/fan 160C/gas 4. Twenty to thirty minutes before the end of cooking time, brush your gammon joint with your glaze and cook the joint uncovered for the rest of the time. Don't forget to let your gammon joint rest at the end of the cooking time. Once you've removed it from the oven, just cover it with foil and leave it for 20 minutes. Resting joints allows the meat juices time to redistribute in the joint and makes sure the meat is nice and moist.

What to Serve with Gammon

Gammon is a great roast and goes well with a large variety of vegetables Choose two or three alongside potatoes. I would always serve it with roast potatoes, but you could use other potatoes such as baked or mashed if you like. Try to use vegetables in season and include something green or the dinner will look bland. Other vegetable suggestions include carrots, red cabbage and roast parnips. Put the roast parsnips in the same tray as the potatoes. Leeks in a cheese sauce or 'Cheesy Leeks' as my kids call them are good for adding a sauce, particularly if you're not having gravy as well. Peas Pudding, which is made from yellow split peas is something that is traditionally served with Roast Gammon or ham. Make this yourself, or buy it in a tin. Table sauces that go well with roast gammon include mustard, apple sauce or cranberry sauce.

My kids love it when we have Roast honey and mustard glazed gammon because it means we can have Spaghetti Carbonara the next day! This is a great way to use up any leftover gammon. If you haven't quite got enough, just add in some bacon. If you're looking for ways to use up any leftover vegetables, why not try a soup? If you have just a small amount of gammon left, why not add it to a quiche? Quiches are great for using up small amounts of leftovers.

Try to buy your gammon joint from your local butcher or farm. This not only reduces food miles, but you invariably get a good quality, high animal welfare joint. You may be able to buy an organic gammon joint. On organic farms, animals are truly free range with plenty of space to graze and forage. The standards also mean more space per animal, plus high standards of feed and bedding and no routine use of antibiotics. The animals' organic feed cannot contain animal by-products, antibiotics or genetically engineered grains and cannot be grown using persistent pesticides or chemical fertilizers. The Soil Association has more information on what organic meat means. 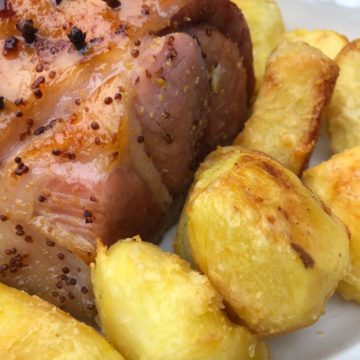 15 minutes before eating - making the gravy

This website uses cookies to improve your experience while you navigate through the website. Out of these, the cookies that are categorized as necessary are stored on your browser as they are essential for the working of basic functionalities of the website. We also use third-party cookies that help us analyze and understand how you use this website. These cookies will be stored in your browser only with your consent. You also have the option to opt-out of these cookies. But opting out of some of these cookies may affect your browsing experience.
Necessary Always Enabled

Any cookies that may not be particularly necessary for the website to function and is used specifically to collect user personal data via analytics, ads, other embedded contents are termed as non-necessary cookies. It is mandatory to procure user consent prior to running these cookies on your website.