A homemade baked Mac and Cheese is a classic and firm family favourite. This macaroni cheese recipe is super simple but also packed with vegetables. Rather than a traditional cheese roux sauce, I've used creme fraiche for the sauce and flavoured it with grated cheese. That way, it's even easier and quicker to make with minimal prep time. It also makes it lighter and lower in fat.

When cooking the macaroni, you should cook it until it's almost done and still has a little bit of bite. This is because the macaroni will continue to cook in the oven and we don't want it overdone and mushy.

I've added leeks and broccoli to this baked macaroni cheese but you could choose other vegetables such as peas or kale or cauliflower. Adding vegetables means the meal will go further and turns it into a good one-pot dish.

Using creme fraiche for the sauce in place of a traditional cheese sauce not only makes this dish quicker to prepare, it also means it is lighter. You could even use a low fat creme fraiche for an even lower calorie version.

For the mac and cheese topping, I've used grated cheddar cheese and breadcrumbs to add a bit of crunch. Breadcrumbs are a great way of using up bread that is past it's best. I usually just put a slice in a food blender to quickly turn it into breadcrumbs. You can also freeze breadcrumbs and use them straight from frozen so this is a great way to avoid foodwaste.

With the added vegetables, this homemade mac and cheese is a great one pot dish. You could also serve it with a green salad if you wish or even baked beans to combine two great comfort foods together.

Using vegetables in season and buying from local sources will help to reduce your carbon footprint. Adding breadcrumbs to the topping is a helpful way to use up leftover bread and reduce footwaste.

Baked macaroni cheese will keep in the fridge for 2 - 3 days. Because we have used creme fraiche in the sauce, it won't freeze so well as the creme fraiche tends to separate and take on a grainy texture when frozen. This doesn't mean it isn't safe to eat, but the texture will not be as good. To reheat mac and cheese, you can reheat a single portion in the microwave or reheat in the oven. Cover the top with foil to prevent the top buring and reheat at 200C /400F until piping hot. 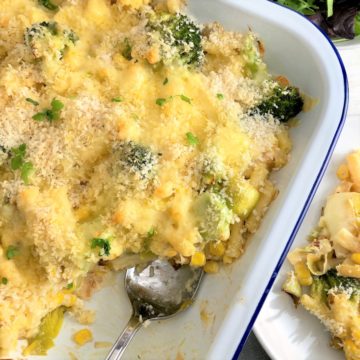 This macaroni cheese will keep in the fridge for 2 - 3 days. It won't freeze well as it contains creme fraiche which goes grainy when frozen. To reheat, cover the top with foil and reheat in the oven at 200C /400F until piping hot. Individula portions can be reheated in the microwave.