This quick and easy Stroganoff recipe with creme fraiche can be made with pork or British Rose Veal (not white veal, see below). It's also great for using up any leftover pork from a Sunday Roast, but can be cooked from scratch. I've designed this recipe as a super quick version of a Stroganoff with no slow cooking. It's ready in just 20 minutes, making it a perfect mid-week dish.

When I say veal, I am referring to British Rose Veal which is ethically produced and has the stamp of approval from the RSPCA and Compassion in World Farming. I'll talk a bit later about what British Rose Veal is and why it's now considered an ethical meat.

A Stroganoff is a dish that originates from Russia with a creamy sauce, mushrooms and seasoning. It's most commonly made with beef, but you can use different meat. To add flavour to this stroganoff, I've used sweet smoked paprika, which also gives it a lovely colour. Serve your stroganoff with rice or pasta. I also like to serve a green vegetable on the side for some colour such as broccoli, but you can choose anything.

What is British Rose Veal?

The first thing to say, is that British Rose Veal is very different to the White Veal, which understandably has had such bad press over the years.

British Rose Veal comes from male calves that are born to cows in the dairy industry. As they obviously won't go on to produce milk themselves, they have little commercial value and many are exported to the continent. Increasingly, British farmers are now rearing these calves for British Rose Veal. The more British Rose Veal we eat, the fewer calves will be exported. These calves are fed on a good fibre diet which makes the meat pink, rather than white.

Where can I buy British Rose Veal?

Many local butchers will stock Rose Veal, but you may need to ask for it. There are also plenty of high quality ethical on-line butchers who deliver and stock it. You could also try the organic ethical food delivery company Abel & Cole. In addition, some UK supermarkets such as Sainsbury's, Tesco, M&S and Waitrose also have it on their meat counters.

A Pork Stroganoff is a great dish for using up leftover pork and reducing your food waste. Mushroom and leeks are in season in autumn and winter and at their best during these months. Try to buy them loose to avoid plastic packaging and so you don't end up buying more than you need.

You can keep this Pork Stroganoff in the fridge for 2 - 3 days. You can also freeze it for 3 - 4 months. Creme fraiche will freeze better than normal cream, but you will need to stir it well to get it back to it's origianl consistency. When reheating pork stroganoff, make sure it is piping hot and stir well. 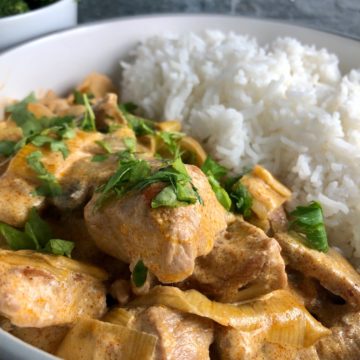